Speak With Your Toronto IT Experts

In today’s modern world, the name “Apple” has become synonymous with technology. It’s no wonder then that Steve Jobs, the company’s late co-founder, has become such an influential figure in American history. His contributions are well documented in motion pictures, books and an authorized biography. 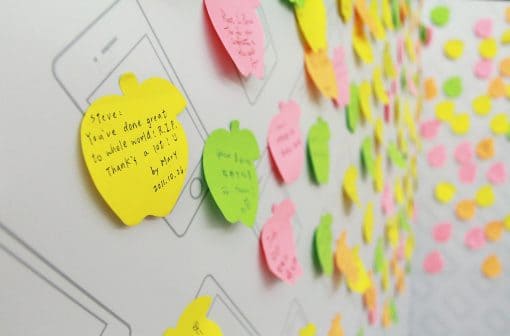 October 16 is known as Steve Jobs Day, which was declared in 2011 by the Governor of California. The day brings forth the opportunity to reflect on the life of the famed innovator and how his contributions have helped advance the human race. From iPhones to iPads and every single app in between, one could argue that humanity would not be as technologically savvy without the work of Steve Jobs.

In August of this year, Apple achieved what no other company in history has done. It became the first publicly traded U.S. company to reach $1 trillion. Not only is this historic in terms of branding, but it brings to light the incredible ingenuity the company has displayed throughout the years. Along with his partner Steve Wozniak, Jobs’ innovations have helped solidify an incredible legacy likely to stand the test of time.

Jobs grew up in the San Francisco bay area in the 1960s. By the age of 10, he had developed a fascination with electronics, likely due largely in part to time spent with his father building crafts. This hobby paved the way for Jobs’ establishment of Apple in 1976, along with his co-founder Steve Wozniak.

Jobs sat at the helm of Apple’s operations until 1985, when he broke ties with the company and established NeXT computers. Apple later purchased NeXT and paved the way for Jobs’ return to the company in 1997.

While Jobs can’t be credited for inventing the first computer, his founding of Apple paved the way for its widespread use. The computers that came before Apple was expensive and typically used only for business purposes. The introduction of the Apple II, the brainchild of Jobs and Steve Wozniak, changed this concept forever. Marketed as the world’s first mass-market personal computer, the Apple II meant users could now access the technology from the privacy of their own homes.

More than two decades later, in 1998, Apple released the iMac, an all-in-one computer. One of Apple’s lesser-known inventions is the iBook, which was introduced in 1999. The laptop came equipped with Wi-Fi technology and a few upgrades to its design. People today may remember it for its tangerine and blueberry color options and clamshell design.

The Apple iPad, introduced in 2010, has made the Internet even further accessible. This tablet computer was built more for entertainment than previous devices, making it a staple in many households, utilized by children and adults alike. The product was deemed so successful that Apple sold more than 15 million of these devices in its first year.

Of all Apple’s products, none is as influential in the tech world as the iPhone. Apple’s introduction of the iPhone marked a paradigm shift for the traditional mobile phone. Apple’s version, like the majority of its most revolutionary products, boasted a sleek, simple design that helped further uncomplicate technology for the masses.

Introduced in 2007, the phone has undergone a radical series of redesigns over the years, each year presenting more opportunities for productivity than the last. Prior to the invention of the iPhone, mobile phones’ primary purpose was to access chatting and emailing. Today’s version is utilized for web-surfing, Facetiming, social media and the utilization of an endless stream of apps available for download at users’ fingertips. Frequent updates and new designs ensure Apple users are getting the best product possible, which has helped the brand amass its own population of loyal followers.

One of Apple’s most significant inventions to date remains the iPod. While mp3 players had been on the market for several years, Apple’s version was seen by many as far superior, and so it began to dominate the market. Able to store thousands of songs, the iPod grew in success with the help of other products, such as Apple iTunes, which was released in 2001. The new technology allowed users to organize their digital library on both their personal computer and through their devices. The iTunes Music Store went live in 2003.

Not all of Jobs’ best inventions were technological. The innovator is also credited with inventing the world’s first glass staircase. The design, which was awarded a patent in 2002, has been used across some of Apple’s flagship stores and has since been adopted, in some sense, by both commercial and residential properties the world over.

Steve Jobs Day is a day designated for honoring the Jobs legacy, but his impact is seen daily, in the hands of millions. While Apple, as a company, has certainly carried on without him, Jobs is one innovator unlikely to ever be forgotten.